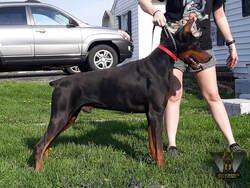 Jackson's Kennel offers stud services to select bitches. We do not co-own litters for a split of the profits. The requirements are strict and nonnegotiable. Bitches must be: ​
For live covers: Stud fee is due at time of first service. 4 ties are permitted with no more than 2 ties in one day.
For AI/shipped semen: The bitch owner will be provided with 2 vials of chilled semen with extender. Additional vials may be purchased for half the stud fee per vial (example; if the stud fee is $2000 then each additional vial is $1000). Chilled semen is shipped ASAP one-day shipping. Banked frozen semen can be arranged and shipped; all fees for the collection, banking and transport are billed to the bitch's owner prior to shipping. We do offer fresh side-by-side AI if performed by a veterinarian; all costs associated are to be paid by the bitch's owner.
POL: Pick of the litter (POL) may be considered only to bitches with clear VWD, DCM1, DCM2, DvDOBs/Dings and DM with an estimated litter COI at or under 39%. POL is at the stud owner's discretion. The stud owner is responsible for picking up/transporting the puppy to themselves.

Pregnancy is to be confirmed by a veterinarian before whelping. A miscarriage is subject to rebreeding at Jackson's Kennel's discretion. A litter is considered two live puppies at birth. Puppies that are stillborn are not counted towards a litter. If in the event a singleton is born and the agreement was POL the bitch's owner has the option to split the sale price 50/50 or to do a rebreeding for POL. If the agreement was for stud fee and a singleton is born the bitch's owner may do a rebreeding for free.

There are no refunds on stud fees. Litters will be confirmed online through the AKC. Jackson's Kennel does not hold litter registration or litter papers. The bitch's owner may request a copy of the stud's certified pedigree. A copy of the stud's registration certificate will not be provided. Copies of health testing may be requested. The stud will be tested for Brucellosis prior to breeding. We require a minimum of a week's notice for stud service request to accommodate for testing and results to be back. A receipt will be provided to the bitch's owner for the paid amount or stating "stud services for pick of the litter from (bitch's name and registration number)" and signed by both parties. A copy of this contract will be provided to the bitch's owner prior to stud service.