DCM and the Doberman Crisis

Getting the the Heart of the Matter.
With all the good and grace that is the Doberman there is a dark shadow; Dilated Cardiomyopathy, DCM.
​DCM is a form of heart disease common among all dogs but particularly plagues the Doberman. Statistics vary but it is safe to say at the current diagnosis rate reported to the AVMA nearly 60% of all Doberman will be diagnosed with DCM by the age of 8 years old. There is no way to prevent DCM. It is a very complex disease. There are many factors to DCM, from environmental, hereditary, genetic, nutritional, eugenics, and more. It is a devastating disease, often fatal, and hard to detect early.
​https://onlinelibrary.wiley.com/doi/full/10.1111/j.1939-1676.2010.0479.x

The Rise of DCM

Before the 1970's DCM was barely heard of. Since the rise of the Doberman's popularity in the AKC show ring and in the hearts of people globally DCM has been on the rise. One theory, the "Popular Sire Syndrome", believes one or a few select dogs corrupted the once diverse gene pool and sacrificed the breeds health. The thought is one or a few very popular and in demand dogs dominated pedigrees eliminating much of the diversity that was once there. Another theory is inbreeding reduced the diversity. It is thought by selecting only certain traits or from certain popular kennel lines the breed foundation was sacrificed thus causing the decline of health and diversity. Many other theories exist but one thing is certain, the obvious lack of genetic diversity is the reason the Doberman suffers DCM like it does today. 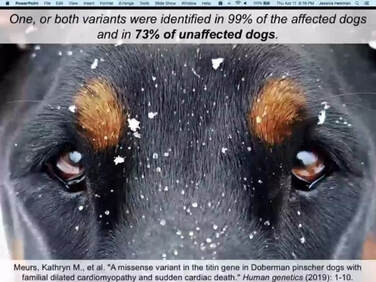 DCM was thought to have a genetic basis but the research is showing genetic mutations alone aren't the cause. The two most common genes researched are DCM1 (aka PDK4) and DCM2. The Doberman Diversity Project states 73% of unaffected Doberman tested in their research had one or both DCM genes and 99% of dogs diagnosed with DCM had one or both genes. Putting it in other words; 7/10 Doberman without clinical DCM carry a DCM gene. 99/100 Doberman who were clinically diagnosed with DCM had at least one DCM gene. Genes alone don't predict DCM. There have been many Doberman to develop DCM and not have the genes, as well as many to have a gene or both and not develop DCM. There is no proven known way to prevent DCM. It is a very complex disease with many factors from environmental, hereditary, genetic, nutritional, to eugenics, and even more. It is a devastating disease and so widespread in the breed there may not be a way to reverse it without drastic measures.

Doberman Diversity Crisis, Diet, and DCM as an Autoimmune Disease 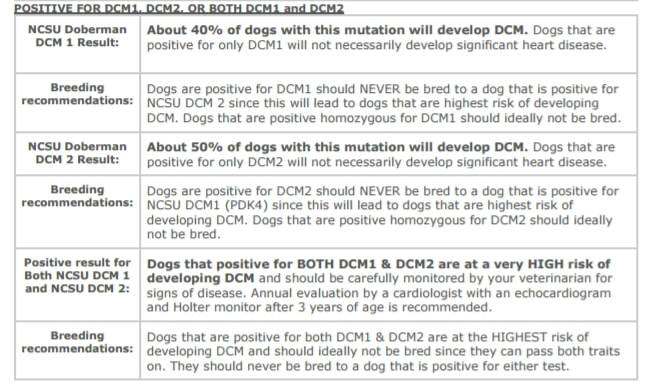 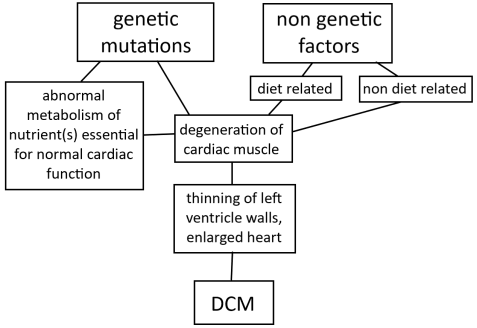 Why What was Recommended isn't Working

"Clearly, the efforts made by breeders over the last three decades to decrease the incidence DCM have had no effect at all on the prevalence of the disorder. Not even a little." - Carol Beuchat PhD
The above chart on the left shows a striking and steady increase in DCM in the Doberman breed. The chart above on the right shows a sharp decline in the breeds life expectancy. Efforts to reduce DCM have been ineffective. Efforts such as the Holter Project failed to reduce DCM rates by avoiding DCM families and DCM positive dogs. There is clear evidence that DCM is on the rise and longevity is in decline.
PDK4 was associated with autoimmune-like cardiac disease DCM in American Doberman, information on dogs was provided by the DCPA.
"​The results from our PDK4 gene replacement studies showed improved cellular viability and reduced mitochondrial toxicity, ROS generation, and caspase-9 activation in response to starvation in AAV-PDK4-treated fibroblasts that were deficient for PDK4. In addition to confirming the cause-effect relationship between deficient PDK4 function and mitochondrial-mediated apoptosis, these data also provide strong support for the translation of this gene therapy approach into PDK4del/del DPs in the clinic.

In sum, we have demonstrated the importance of PDK4 function during periods of low nutrient availability. Our observed activation of the intrinsic apoptotic pathway in fibroblasts deficient for PDK4 suggests that cardiomyocytes in the hearts of PDK4wt/del and PDK4del/del DPs face a similar metabolic challenge. While these dogs rarely experience true nutrient deprivation, the inability to effectively switch from glycolysis to oxidative phosphorylation likely has minor initial consequences that evolve over time into cardiac remodeling and ultimately result in DCM and heart failure. Further investigations into the specific diets of affected and unaffected DPs with identical mutation statuses may reveal a relationship between the development of DCM and nutrition in this at-risk population."
​https://www.liebertpub.com/doi/full/10.1089/biores.2017.0023

Outcrossing? Is it a Viable Option?

I am not shy about supporting outcrossing. I believe outcrossing done right, to breeds not prone to the same cardiac, eye, and cancers that plague Doberman, would benefit the breed. One risk of outcrossing with other breeds is it could potentially lose what the Doberman is. I believe crossing back to the breeds that helped establish the Doberman will help reduce any lost traits (if any), making it easier to cross back into the Doberman we all know and cherish.
​
Much like the LUA program that outcrossed to correct and reduce the rate of painful and often fatal bladder stones in the Dalmatian, an outcross program may help save the Doberman breed and allow for fresh, untapped lines to be worked into the diversity pool. Diversity can't be added without actually adding to the gene pool. You can't just create new diversity from the diversity we have now.

Say an outcross program is started. How should it be done? I personally feel we should avoid breeds with VWD, PRA, and cardiac issues. Selecting the best dogs genetically as well as health-wise is crucial. Second, you would breed to look at the dog physically, matching with breeds similar in build to the Doberman. Thirdly, you want to consider the temperament and working ability. You don't just want a dog to look like a Doberman, you want it to be ​a Doberman. Once you have established a solid base of dogs to cross, you start the tedious process of selecting which dogs fit the Doberman standard and your health/program aim and keep them back. You continue to selectively breed until you have worked back up to purebred Doberman (genetically testing as 98% and higher). Temperament testing and working ability can be assessed by professional trainers.

I firmly believe the key to saving the Doberman and preserving the breed is to create more diversity. How that is to be best done is the million dollar question!

"As far as we are aware, there are currently no formal breeding schemes operating which aim to reduce or eliminate this common condition from the Doberman pinscher breed. A genetic test would be very valuable as this would enable the detection and removal of affected individuals from the breeding pool. However, because the condition is so common in Dobermans, there is concern that removal of all affected individuals from the breeding pool might cause excessive restriction in the choice of Dobermans to breed from, and hence a reduction in the size of the breed’s gene pool with the risk that other genetic defects may inadvertently increase in frequency. Such problems could be avoided by out-breeding with dogs of other breeds." - ​https://www.ufaw.org.uk/dogs/doberman-pinscher-dilated-cardiomyopathy

I am passionate about maintaining the breeds integrity. Doberman are a unique and versatile breed. There is always a risk that keeping within the breed will not reduce the current rate of DCM and health decline. I feel there may be hope for the breed as long as pockets of lesser known or used lines are tapped into. I want to see the breed preserved and to thrive. Maintaining the Doberman as we know it today is crucial to keeping the breed intact. Many fear a true outcross program would ruin the breed integrity. The key to keeping purebreds purebred is to find and use lesser known dogs. Pet lines offer invaluable genetic material that is often snubbed by fanciers of champion dogs and champion pedigrees. Working lines bred to show lines can help create diversity. Show lines bred to service lines, pet lines bred to working lines, American pedigrees bred to imports ... we still have some tangible room to work with!

How We Manage Our Breeding Program and DCM

I aim to breed from pedigrees with longevity. I seek out various lines and origins to keep as diverse as possible. I aim to produce low coefficient of inbreeding percentages and preserve diversity. I feel that we are limited in what pools are available in the Doberman world, but I still strive to bring the most diversity into my program that I can find. I focus primarily on genetic health. I breed for sound health more than aesthetics or flashy pedigrees. I feel the best direction is in taking a step backwards and focusing on the pools of Doberman that get overlooked so often just because they lack champions or prestigious names (pet lines, outside pedigrees, imports from lesser known countries, old lines, etc.). I work closely with many breeders who share a similar vision and passion for the breed, who want to see better dogs produced health and genetic wise.

The Real Question: Do I Holter/Echo?
​Holter: I do not routinely holter test.
Echo/Auscualation: I do echos and auscuatlations examining for congenital defects as well as changes in the heart.

Evidence points to lack of diversity causing DCM to behave more as an autoimmune disease. Holter and echos are diagnostic tools used to identify DCM and cardiac abnormalities. It can not prevent DCM, just diagnose it. The last 30 years of holter and echo testing has failed to reduce the rate of DCM, even with the Holter project and DCM education. DCM effects over 50+% of the breed. With half of all Doberman developing DCM in their lifetime testing has failed to be a reliable method in eliminating DCM. Knowing is valuable, but it won't stop DCM. DCM is much more complex than originally believed. Again, I redirect back to the topic of diversity. I firmly believe lack of diversity has given way to the rise of DCM.

What to Take From This

When looking for a Doberman keep in mind NO line is free from the DCM risk. It is the shadow that haunts the breed. Maybe in time research will find a way to eliminate it. Right now, many scientists are leaning towards low COI as the key to reduce and potentially eliminate DCM one day. Good breeders look beyond the appearance and titles. They look past the health testing. Good breeders look at the future; they look at how to get today's dogs to be tomorrow's foundation. No line is DCM free. A good breeder should explain the breed's disposition to DCM and should be breeding for diversity and for longevity. Hopefully, as good breeders  breed for the future DCM will be just a vague memory.